10 commandments for the best user experience

We’ve been creating digital experience for almost 2 decades now. A lot has changed and evolved since the first website was put online. Websites, apps and more have evolved and will keep evolving in the future of the digital world. Bu there’s one thing that has stayed the same since the beginning and will always stay the same until the end. One thing that we often take for granted, but must never forget. That thing is us, humans. We often forget that on the other side of the screen there is a person, not just a number or data-source.

We interact with these digital interfaces, be it a website, application, AR or VR, using our eyes to look at it and our hands to tap on a screen, type on a keyboard or click on the controller to grab stuff in the virtual world. All of this gets processed and interpreted by our brains. We need to understand how our brain works in order to influence human behaviour. This is why we should leverage the science of psychology as a way to make the experiences more efficient, easy and pleasant.
‍
Psychology is the scientific study of the human mind and its functions, especially those affecting behavior in a given context. It’s the science of our conscious and subconscious decisions, as well as our feelings and thoughts. Using the research done in psychology over the last 100 year will help us creating better experiences

The Psychology Principles YOU Need to Know for your next web project.

Over the course of the article I will cover 10 of the most powerful psychological principles. Implementing these principles will help you make your website more user friendly and help you guide your visitors to the right next steps.

Principle 1: People spend 99% of their time on other sites. (Jakob’s Law)

Users spend most of their time on other sites. This means that users prefer your site to work the same way as all the other sites they already know.
Jakob Nielsen , a User Advocate and principal of the Nielsen Norman Group which he co-founded with Dr. Donald A. Norman (former VP of research at Apple Computer) is an established name in the user experience community and beyond. He has invented several usability methods.
While doing research on many different websites and with thousands of users, he came to the following conclusion: users will transfer expectations from one familiar product to another that appears similar. By using existing conventions and standards, we can create better user experiences in which the user can feel ‘at home’ and focus on task at hand.

Principle 2: People need to be convinced within 5 seconds.

When a new visitor arrives on your website, immediately the ‘What is it?’ and ‘what’s in it for me?’ should become clear. You only have 5 seconds to leave a first impression. If that impression is not as they expected, they well leave for the competition. There are a 3 main messages that the new visitor needs to understand in 5 seconds:

We can achieve this by having a clear value proposition followed by a call-to-action. Even if this call-to-action is not immediately clicked, it’s still important to show what you want the visitor to do next. Once this base is created, the user can move on and explore your website in peace. If it’s not clear, the visitors will not even bother to search for the answers they need.

In 1982, Walter J. Doherty and Ahrvind J. Thadani published a research paper for IBM that set the requirement for computer response time to be 400 milliseconds. When a computer can react within 400ms to a command or input giving by a person, the application can become addictive. The paper also said that productivity can reach the highest level when neither the user nor the computer needs to wait on one or the other. This correlation is called the Doherty threshold. 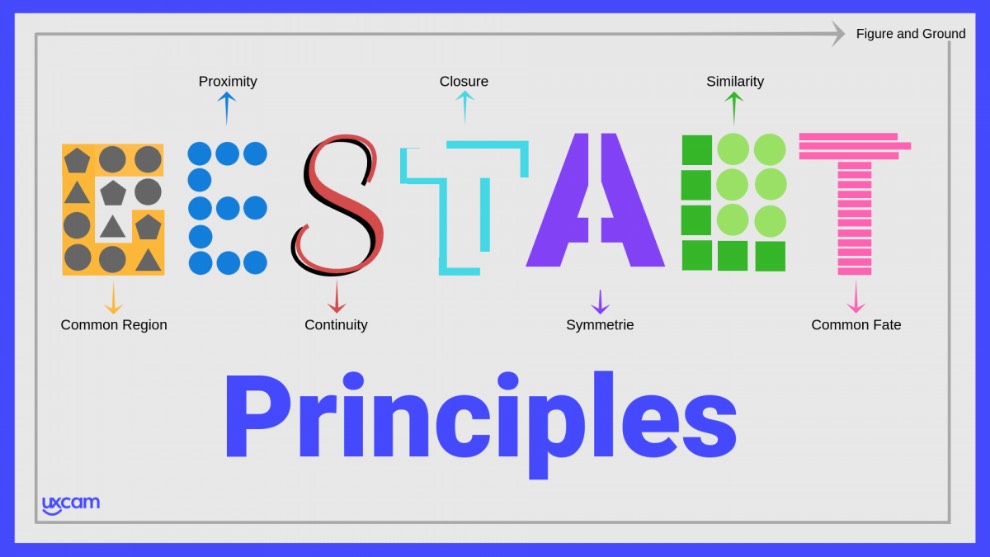 Gestalt psychologists emphasized that organisms perceive entire patterns or configurations, not just its individual components. Popularly summed up in the phrase: “the whole being more than the sum of its parts.” The laws of gestalt psychologists are organized into five categories: Proximity, Similarity, Continuity, Closure, and Connectedness.
‍
The law of proximity concludes that objects that are near each other tend to be grouped together. Proximity helps to establish a relationship with nearby objects. Our mind creates clusters in order to understand and organize information faster and more efficiently.
‍
The human eye tends to perceive similar elements in a design as a complete picture, shape, or group, even if those elements are separated. Ensure that links and navigation systems are visually differentiated from normal text elements, and are consistently styled.

In balance with the law of similarity, is the the Von Restorff effect, also known as the isolation effect. This predicts that when multiple similar objects are present, the one that differs from the rest is most likely to be remembered.
‍
The theory was coined by Hedwig von Restorff, a German psychiatrist and pediatrician. She presented participants with a list of categorically similar items, but one was distinctive or isolated. The participants remembered that distinctive one better. 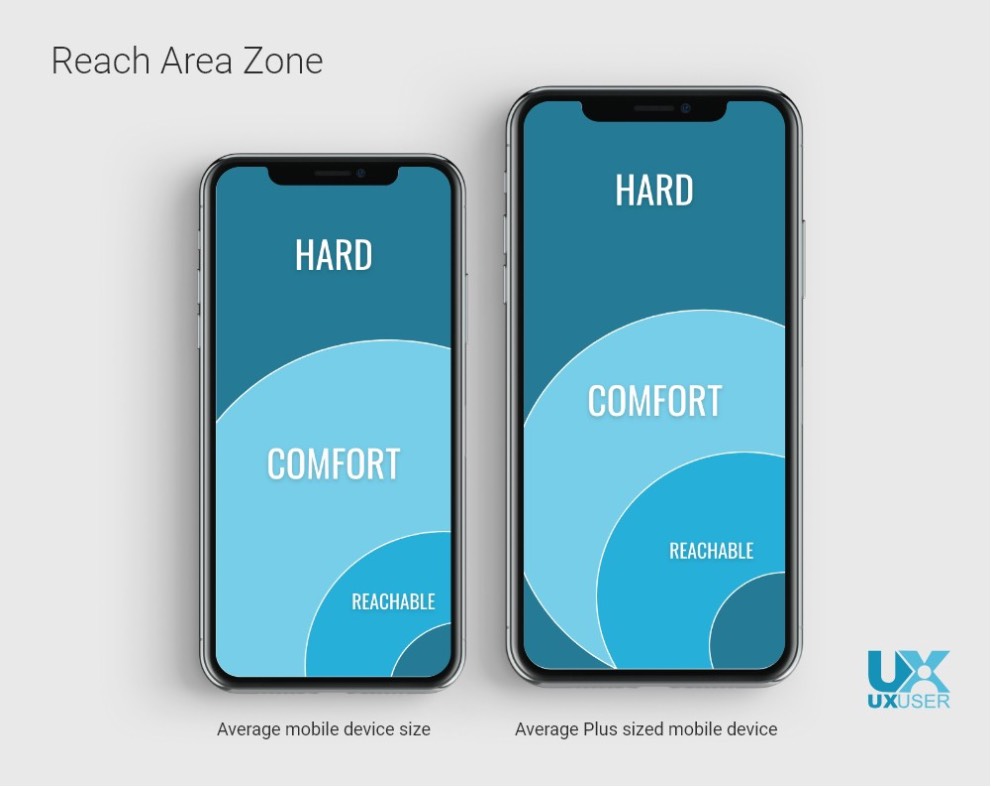 Fitts’s law, as it is named more properly. Psychologist Paul Fitts documented that the time required to move to a target depends on the distance to it. Like, duh, we’re not stupid! But what’s interesting is that it relates inversely to its size. By his law, the faster you want to move to a small target, the greater the error rates get, due to the speed-accuracy trade-off.
‍
This law is translated to the field of user experience. Large buttons make it easier to navigate. Smaller buttons are more difficult (and time-consuming) to click. Next to the size, we need to make sure that distance between a user’s task or attention area and the related button is as short as possible. As a third rule, we need to give enough spacing in between different touch areas to prevent mistaken clicks.

In 1956, George Miller declared that the span of immediate memory and absolute judgment were both limited to around 7 pieces of information. In other words, the average person can only keep more or less 7 items in their working memory.
‍
For your website, it’s important to keep this in mind when working with long lists. It’s difficult to process and to scan long lists which have too much information. We can use groups as a way to make it more readable. Grouping similar elements in smaller digestible elements of 5 to 9 elements, where 5 is ideal. This gives the user a better overview of all the elements to choose from.
‍
As a sidenote, lists with uneven numbers are easier to process. If we have a group of 5 elements we can quickly see the middle item and split it in smaller groups. 2 on top, 2 below and 1 in the middle

Principle 8: The beginning and the end

The serial position effect, a term coined by Herman Ebbinghaus, describes how the position of an element in a sequence has an influence on how easily it can be remembered. Items presented at the beginning of a sequence and at the end of a sequence are recalled with more accuracy than items in the middle of a list. We can use the manipulation of this serial position effect to create better user experiences. It has been reflected in many popular designs by successful companies like Apple, Electronic Arts, and Nike.
‍
Placing the least important items in the middle of lists can be helpful because these items tend to be stored less frequently in long-term and working memory. Positioning key actions on the far left and right within elements such as navigation can increase memorization. 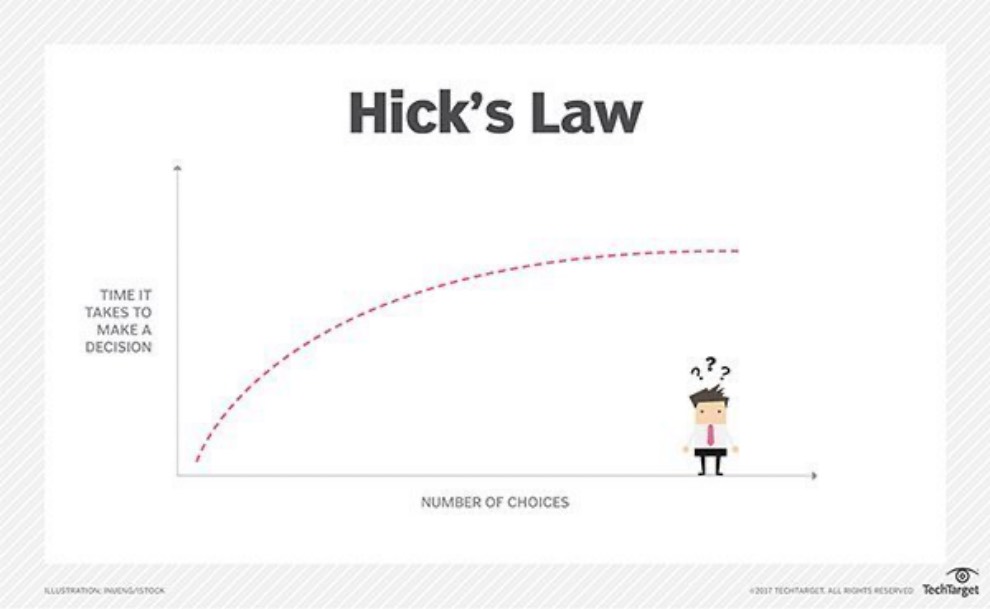 Principle 9: People freeze when having too many options

The time it takes to make a decision increases with the number and complexity of possible choices. This principle goes by the name of Hick’s Law (or the Hick-Hyman Law). In 1952, William Edmund Hick and Ray Hyman set out to examine the relationship between the number of choices and the reaction time to choose. As expected, if the number of choices increases, the time to make a decision increases with it.
‍
This happens to be the same on your website. Often we might think that giving the users all of the possible options is good, because we give her/him the freedom to decide. But users bombarded with choices have to take time to interpret and decide, giving them work they don’t want. They’ll freeze up and will leave your website for another one.

Think about the last movie you watched. What do you still remember about it? Chances are that you will remember the most intense points and the ending. This can also be said for your user’s journey. People judge an experience largely based on how they felt at its peak and at its end, rather than the total sum or average of every moment of the experience. Also know as the peak-end-rule.
‍
Chances are that you will judge this article by this last principle. And as principle 8 stated, you’ll probably remember this one and the first on the longest.

Interested in bettering your visitors’ UX? Contact us at d.nicolas@serviceplan.com and let’s enter the third decade of digital experience together. 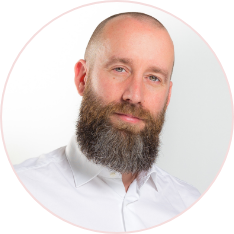